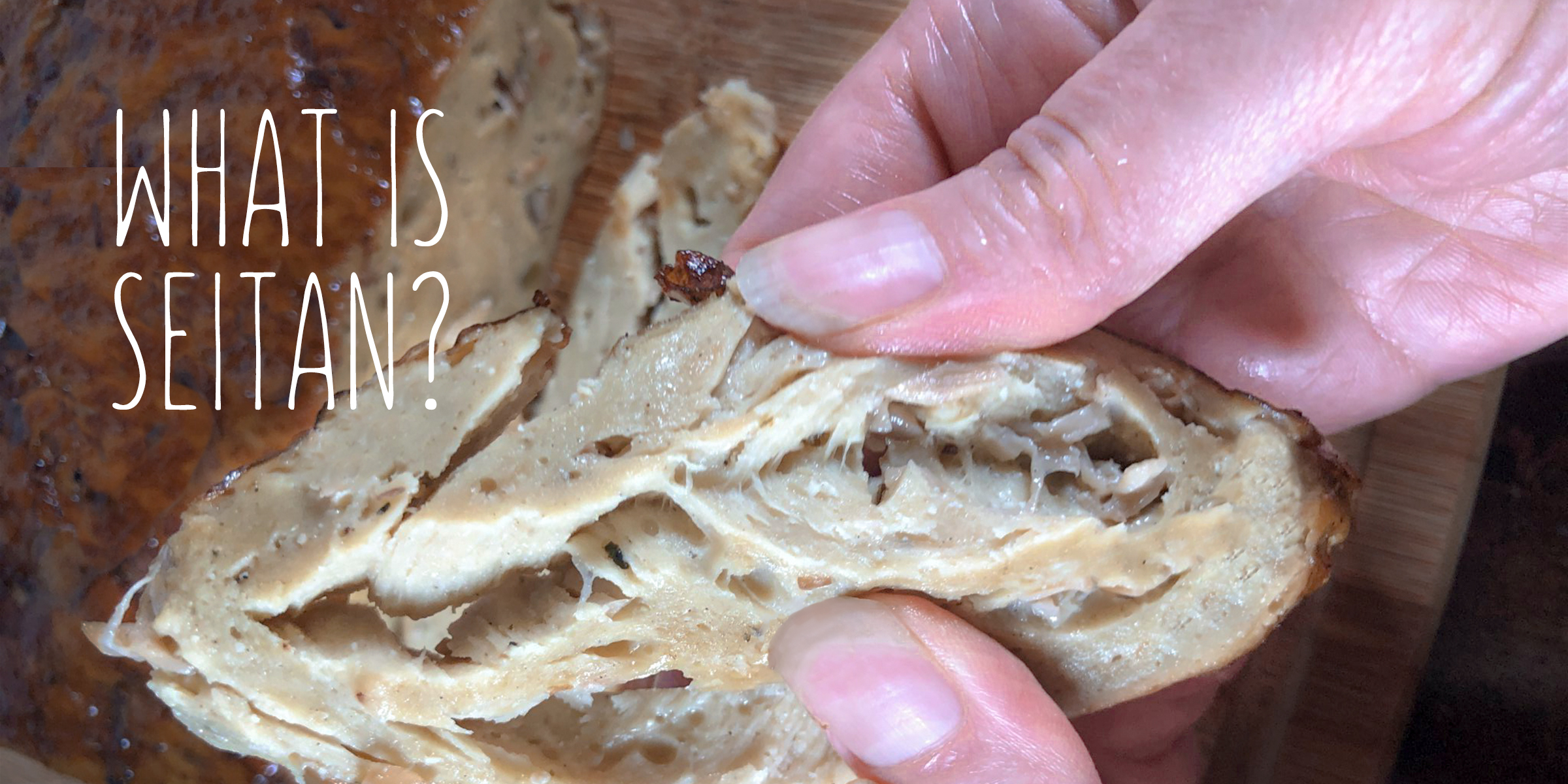 Seitan (also known as “wheat meat,” “wheat protein,” or simply “gluten”) is a food made from gluten, the protein found in wheat. Although the word “seitan” (SAY-tan) is of Japanese origin with 生 “sei” meaning fresh or raw, and 蛋 “tan” (from 蛋白 tanpaku) meaning protein, its consumption was first documented in China going back as far as the 6th century.

Traditionally, seitan is made by combining flour and water, forming a ball of dough. Then the dough is either kneaded or given time to rest (or both) in order to activate the gluten. Next, the dough gets washed under water to separate the starch from the gluten, and finally the gluten is cooked. That method (known to many nowadays as “wash the flour” or “WTF” for simplicity’s sake, of course 🙃) has seen a rise in popularity over the past few years, though many prefer the ease of using vital wheat gluten (VWG) to make seitan.

With VWG, the process of washing to separate the gluten and starch is done commercially. The gluten is then dehydrated, ground, and sold as a flour which gets rehydrated to make seitan. This is basically like “instant” seitan, though there are pros and cons to both methods.

The popularity of seitan is largely driven by its very meaty texture, high protein content, and generally low-carb composition (washing flour by hand is not likely to be as low-carb as commercially-produced VWG) making it a fantastic meat substitute for vegetarians and vegans.

Without any seasoning, you might describe seitan as having a bready flavor, and in some brands of vital wheat gluten you may notice that flavor is more intense than with others, but generally it tastes however you season it.

You can find seitan being sold as mock meats such as “chicken” or “duck,” and you’re likely to find wheat gluten listed on the packages of many products sold as deli slices, sausages, nuggets, patties, and more.

How to Cook Seitan

Steam, simmer, braise, fry, bake—the possibilities are practically endless and the one you choose will likely depend on if you’re starting with WTF method or VWG, any additional ingredients you may have added, or the result you’re trying to achieve. Learn more about cooking methods here.

With all of the possibilities, learning how to cook seitan may seem a bit daunting, but you’ve come to the right place!

Check out this post for some tips, tricks, and easy recipes to help you get started.

This tutorial will teach you how to wash flour.

Read here about some common seitan ingredients to stock your kitchen, and here about getting the most flavor out of your wheat meat creations.

Or jump in and explore all the seitan recipes here!

The "Wash the Flour" (WTF) method of making seitan from scratch is easier than you might think. Become a master by following these 10 simple steps.

Checkout this list of some of the most widely-used ingredients for making seitan.

I created this website hoping to make it easier for people interested in seitan to be able to find, share, and rate recipes. Through both research and my own experimentation, I hope to answer some commonly asked questions in the "Learn More About Seitan" section, and you’ll find some of my own recipes here, too. Happy cooking!
This website uses cookies and third party services. Ok
Go to Top