This vegan prime rib(less) roast made from washing flour has an amazing meaty texture and beefy flavor. It's fancy enough for your holiday table, but easy enough to be enjoyed more often. 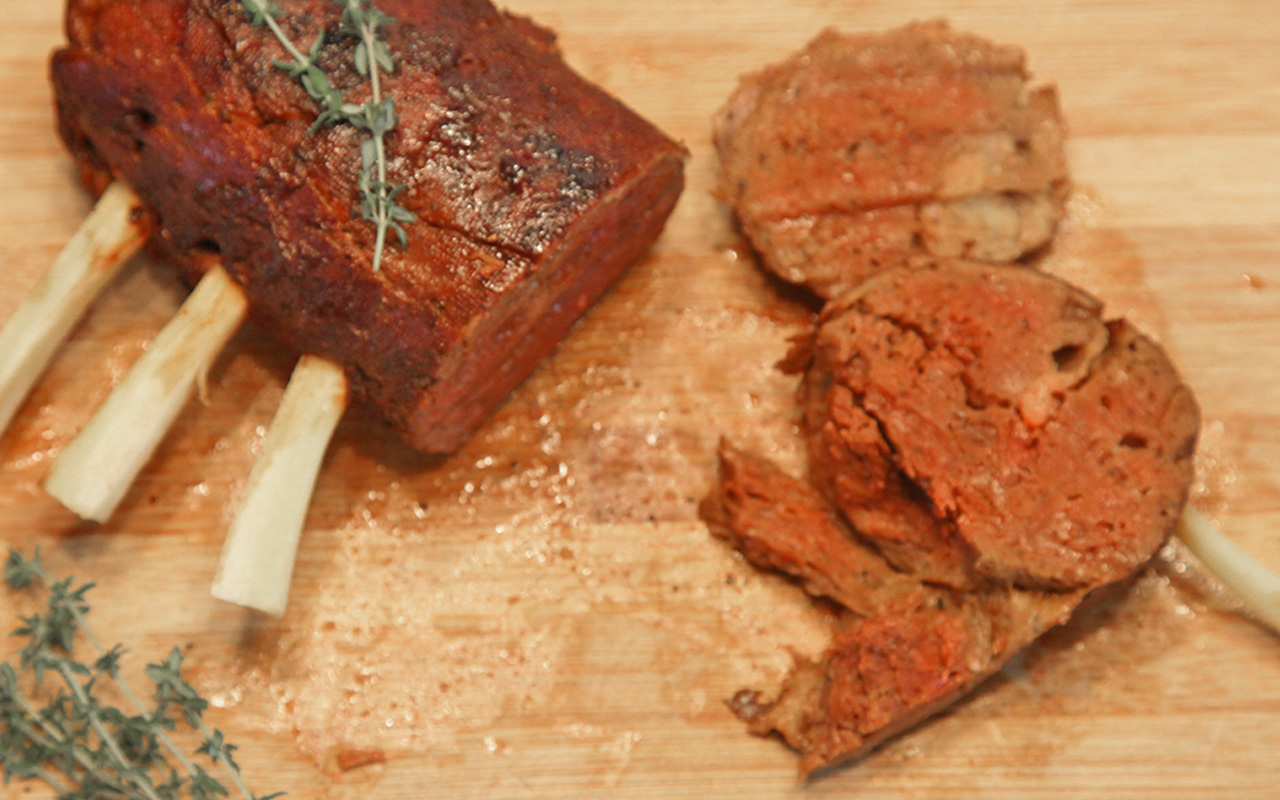 Washing Flour
7 cups bread or all purpose flour, separated to 6 and 1I used bread flour with a 12.7% protein content
2 ½ or more cups of water
3 tbsp beet powderNot sure how well this worked out because the dough turned more gray than pink with washing, but you might have better luck with a different brand.
For Simmering
1 ½ times the beaf variation of this recipe (3 quarts)or use 3 quarts low-sodium vegetable broth plus 1 1/2T dried porcini mushroom powder, 1 1/2T vegan Worcestershire sauce, 5T soy sauce or liquid aminos, 2t Marmite
Beefy Portion
½ small beet, pulverized mine weighed 1.5 oz
½ tbsp soy sauce
½ tbsp vegan worcestershire saucestore bought or make your own with this recipe
2 tbsp steak seasoning you can use store bought instead, but be sure to add dried porcini mushroom powder
A few drops of vegan red food coloring (optional)I did not use it for this, HOWEVER, I have failed many times at getting my seitan to stay red (and not completely turn brown) using beets in any form. This time I got lucky. If the color is very important to you, you might want to go for it.
Fatty Portion
½ tsp garlic powder
½ tsp salt
½ tsp white pepper
1 tbsp olive oil or other cooking oil
For Pan Searing
2 tbsp vegan butter
1 tbsp soy sauce
1 tbsp molasses
couple sprinkles of coarse black pepper
plus 1 large parsnip, cut into piecesif using, for decoration
For Gravy
2 tbsp vegan butter
1 large shallot, chopped
3 cloves garlic, minced
2 tbsp all purpose flour
2 tbsp dry red vegan wine
1 tbsp vegan Worcestershire sauce store bought or make your own with this recipe
2 cups reserved simmering broth
6 sprigs fresh thyme
1 sprig fresh rosemary
½ tsp coarse black pepper
salt to taste
Washing Flour
1

In a large bowl add 6 cups of bread or all-purpose flour (recommended protein of 11% or higher) and 3T of beet powder, if using. Start by adding about 2 cups of water and knead to form a dough. If your dough is not coming together (tough and crumbling apart) add a little bit more water. I typically add about another 1/4 cup as I knead. If you're dough is very sticky, add a little more flour. Knead for about 10 minutes or until your dough ball is cohesive and well-formed.

In another, smaller bowl add 1 cup of bread or all-purpose flour and 1/3 cup of water and knead together to form a dough ball in the same method as above. Cover both dough balls with cool water and let them rest for at least an hour, or up to 8. After resting in water your dough is ready to be washed.

If you're new to washing flour, you can follow this step by step guide.

For my larger dough ball, which will become the "beef" portion, I washed 5 times, beginning with cool water. The water was still a little cloudy, but the ball of dough was "squeaky," getting more stiff and very stringy. It also kinda turned gray like most of my beet powder washed out. 🤷‍♀️

For the smaller dough ball, I only washed 3 times beginning with cool water. I wanted to leave more starch in this to emulate a "fattier" texture. (This idea was inspired by Oncle Hu's Vegan Pastrami recipe utilizing his "Not That Washed" (NTW) method as it was shared in the Seitan Appreciation Society Facebook group, though I did wash this a little bit more than his method suggests.) It was just starting to feel squeaky when I stopped and I let the water remain more opaque. Let both dough balls drain in a colander for about 20 minutes.

While your dough balls are resting, prepare your simmering broth. If making from scratch you'll want to bring it to a boil and then simmer for at least an hour. If starting with vegetable broth, you can add the ingredients to your slow cooker and start getting it heated up.

Put a half of a small beet, chopped (mine weighed 1.5 oz) into a food processor with 1/2T vegan Worcestershire and 1/2T soy sauce. You want this mixture to be liquidy, breaking down the beet as much as possible. Process this mixture into the large portion of gluten along with 2T of steak seasoning to make the "beef" part and food coloring if adding. Allow to rest on the counter until the gluten has reformed and is strong enough to stretch and knot. Tie it in 2-3 knots and allow it to rest again.

While the beefy portion is resting, add the small fatty portion to the food processor with 1/2 each garlic powder, salt, and white pepper, along with 1T olive or other oil. Let this rest for a while so the gluten starts to reform and it can be stretched and rolled out.

Roll out the fatty portion of the dough. Place the knotted beef part on it, and stretch and press it out until it's about the same size as the fatty part. Then roll them up together like a pinwheel. Stab your roll about 10-15 times all over to allow for the broth flavors to get in. You can optionally tie it up in cheesecloth to help it to retain the log shape. It will otherwise flatten out a little bit when cooking in the broth.

Place the dough roll in hot broth. You want the broth to stay at around 190F (85C), and cook the seitan for about 1 1/2 hours, rotating once halfway through. I achieve that temperature with my slow cooker on high. I have also used the slow cooker function on my Instant Pot set to the "normal" setting for similar results. Once your seitan is cooked, allow it come to room temperature and then refrigerate it in the broth for about 8 hours or overnight. (The broth will be used again.)

On the day you're serving, bring the roast out and allow it to come to room temperature for about an hour or two. Then preheat your oven to 350F. In a large saucepan, melt 2T vegan butter over medium-high heat. Add the 1T soy sauce and molasses and place the roast into the pan. Rotate to sear and brown all sides.

If using parsnips for decoration, stab the roast in the sections where you want them and stick them in. Add about 1 cup of reserved broth to a small roasting pan (enough to coat the bottom) and place your seared seitan in it. Cook it for about 30 minutes or until heated through, basting with the broth at the bottom and flipping a couple of times so it does not dry out.

Meanwhile, in the same pan you used for searing, heat the 2 tbsp vegan butter on medium. Add the shallot and stir until it becomes a bit translucent. Next add the garlic and stir for about a minute. Coat them in the 2T flour and mix as the flour absorbs all the liquid in the pan, stirring so it doesn't stick. Deglaze with the wine, or if you're avoiding wine, add a few splashes of broth until everything comes together. Next add the vegan Worcestershire sauce and 2 cups broth, plus fresh thyme and rosemary. Cook the mixture down until it thickens and is reduced by about half. Season with ½ tsp pepper
and salt to taste.

Bring out the finished roast, slice, and ladle on the hot gravy to serve.